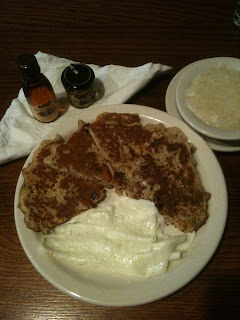 This is the first time I have eaten breakfast out since I had been eating on the healthy side of spectrum foods available to me. I have planned ahead and decided I would get an egg white omelet, grits, and whole wheat toast. Unfortunately, Cracker Barrel doesn't have omelets on the menu. They had a new pancake breakfast on the menu, which looked great. 3 Granola pancakes, two eggs, bananas and honey, grits or cheesy hash brown casserole and meat of your choice. When the waitress came, I told her that I was going to ask her for something that may not be possible, and let her know that if it's not, then it's ok. I ordered one granola pancake & egg whites. She said she would make it happen with the kid's menu! She was great! My friend gave me her grits (she doesn't like it) so it worked out perfectly. It came with a little jar of honey & I asked for a little bottle of maple syrup. When it came, I removed the little ball of butter off the top and cut the pancake into fourths. I alternated dipping the tines of the fork into the syrup and honey with each bite of pancake. I barely used, or needed, they either because it was a wonderful pancake; one was plenty. Beverage: iced tea- no sugar
Email Post 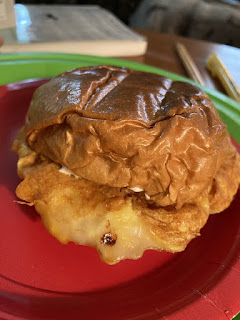